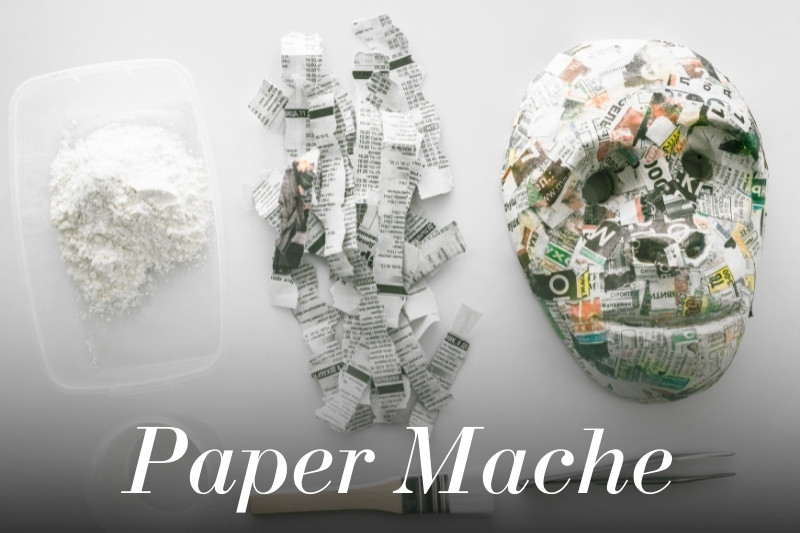 Paper mache, or papier-mâché as you’ll sometimes see it spelled, is a technique used to sculpt and decorate that uses layers of paper and adhesive. You might remember it from your elementary school art class, but paper mache has a rich history and many beautiful, practical uses. So, what is paper mache, anyway?

Paper mache is one of the most accessible paper crafts you’ll come across in terms of supplies, and yet its uses seem endless. Throughout history, papier-mache was used to make everything from Egyptian funerary masks to Chinese parade floats – even furniture in England!

We’re going to take a brief look at the history of paper mache then discuss its variations and how you might go about using these crafts. The beauty of paper mache is in its simplicity, which allows it to be applied to an endless amount of project ideas. You’re going to be amazed at all the projects you can make using only paper and glue!

Though the term “papier-mâché” comes to us from France, the paper mache technique gets its first recorded start in Chinese, Tibetan, and Egyptian cultures, where it was used to create beautiful works of art.

You’re probably familiar with the classic Chinese festival decorations – think of the iconic paper tiger – but in Egypt, paper mache created beautiful funerary masks using soaked strips of linen. Vases, bowls, and other decorative objects were made by molding the paper to a base, which controlled its shape.

Perhaps most interestingly – and unexpectedly – papier-mâché was used in Europe beginning in the late 1700s to make furniture. The invention of steam-powered machines allowed the paper to be pressed into solid, sturdy forms.

Using these machines, a technique called “Japanning” became popular. The gorgeous Japanese furniture of the time was made with lacquered wood that did not stand up to the climates of Europe, so furniture makers would copy the design by mixing tar or pitch into their paper mache to achieve that glossy, dark, iconic finish.

Art, both decorative and practical, was created by many civilizations using the paper mache technique. Gorgeous furniture, elaborate vases, and props for celebrations were all possible – and cheap – by using paper mache.

Because its ingredients can be found in any grocery store, anyone can do it. And because paper is light, papier-mâché is perfect for objects that need to be held high in demonstration. Paper mache can be seen on display in coverage of many war protests, whether they take place in Central America, Afghanistan, or here in the United States.

Very popular in the protests of the 1960s, American demonstrators found meaning in the way paper mache takes “garbage” and turns it into art. They sculpted caricature-like busts and heads of prominent politicians, carrying or even wearing them at protests and marches. The result was a clever, stunning, and impactful visual that remains iconic to this day.

Paper mache can be made from the iconic strips of paper soaked in adhesive, but you can actually use other kinds of paper to make paper mache crafts. Paper pulp is great for sculpting, while the torn strips are best for molding using a form like a balloon or chicken wire.

What materials do I need for paper mache

Essentially, you only need paper and adhesive to create paper mache. There are, of course, some considerations to make if you would like to take your craft to the next level. This information will help you make the best choices for how you want to use paper mache.

The best paper for paper mache is going to be what you have lying around the house already! Truly, there are so many great things about paper mache: it’s easy, it’s cheap, and it’s eco-friendly. By recycling your old newspapers, you give new life to something that would otherwise have been thrown away.

Please note that, if you choose to recycle your magazines, the glossy pages will not absorb your adhesive as well because of their coating. Magazine paper is not nearly as porous as newspaper, so you will have to soak the pages a bit longer to get them to stick.

Try to find a non-coated, un-glossed paper for your papier-mache. Newspaper really works the best, so look around, ask friends and family for their old stacks of newspapers. Many people tend to unintentionally stockpile these things and will be more than happy to give them away to you!

Patterned paper can also be great for paper mache projects, and you’ll save yourself a step since it’s already beautifully decorative!

There are two main ways to make your own glue for paper mache.

The first method to make paper mache glue is to mix flour and water. This is how it was done for many years, but there’s a small downside. This mixture can get moldy if you live in a humid climate.

Choose a mixture of white glue and water if you’re concerned about mold. This is a newer technique, but it works very well.

A third method is to buy a pre-mixed adhesive. Some projects need to be made of tougher stuff, which is where this option could come in handy. If you want to make something that needs to hold some weight, consider buying a strong, pre-mixed adhesive.

However, for most simple projects, homemade glue for paper mache will work just fine.

The best molds for paper mache are balloons, cardboard, and chicken wire frames.

Balloons will allow you to form a beautifully round shape, and then you can simply pop or remove the balloon when your piece has set. This technique is great for making bowls or little catchall dishes.

Cardboard is a wonderful mold for paper mache if you’re crafting any kind of box, like a trinket box or a recipe box. Historically, paper mache was used by Victorians to create snuff boxes.

Chicken wire is the best mold for paper mache if your desired shape is not perfectly uniform. Political protestors, and even costume creators, often form giant heads to wear from paper mache and chicken wire. Chicken wire is great stuff. You can use it for a seemingly infinite amount of projects.

How to start paper mache for beginners

To get your start making paper mache, we suggest a simple yet satisfying project. Doing too much too soon can be the killer of your enthusiasm, and if you take on a massive paper mache project, you’ll get discouraged in no time.

The best way to start paper mache for a beginner is to use a glue-based adhesive and newsprint. A great beginner papier-mâché craft is to blow up a few balloons of different sizes and create a series of little bowls to display on your table or bookcase.

YouTube tutorials and Pinterest are great ways to learn and get ideas for how you might use paper mache. There are so many creative people sharing their ideas online.

Once you get the technique down, you can move on to more ambitious projects. You can sculpt a piñata using chicken wire for a party or use paper pulp as if it were modeling clay to create something amazing!

Let’s run down a couple of quick frequently asked questions about papier-mâché.

Why is it called paper mache

The technical spelling is papier-mâché, and it comes to us from French. It translates to “chewed up paper”. Makes sense, doesn’t it?

Is paper mache better with glue or flour

Though flour is the traditional, cheaper method, in terms of ease and durability, glue is the better choice. It won’t get moldy, it’ll be stickier, and you’ll have an easier time forming your project.

How long does it take paper mache to dry

This is going to depend a little bit on your home climate, but generally, it will take a finished paper mache project over a day to dry completely. We wouldn’t recommend speeding the process up with a heat source. Remember, you’re working with paper!

​What is paper mache: Final Thoughts

Paper mache has stood the test of time for a reason. It’s a simple yet effective craft that has countless uses – both practical and decorative. Once you start experimenting with different papier-mâché projects, you’ll realize that its simplicity is its greatest strength.

There are so many great projects you can make with papier-mâché. Just have a look around you! Almost anything can benefit from a little paper mache magic. Comment your favorite way to use paper mache, and let us know if you learned anything new from this guide!