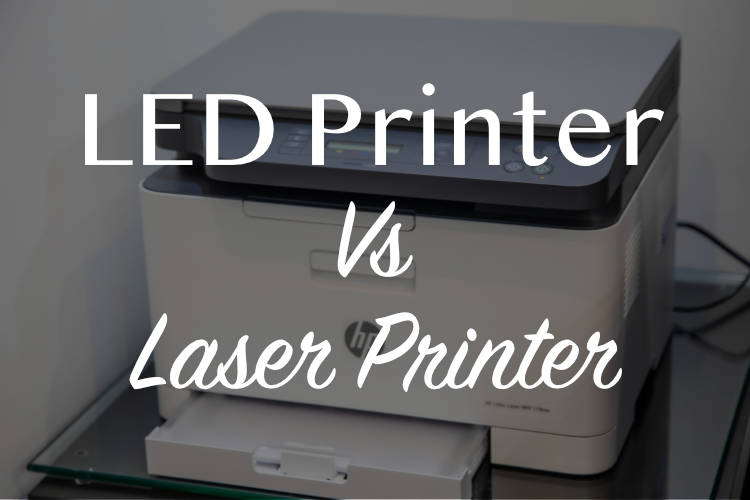 With the advancement of printing equipment, there have been innumerable printing options available for both office and home use.

These include inkjet, solid ink, LED, and laser. Although all the digital devices have their remarkable features, LED and laser printers are the best options for toner-based actions.

Both these printers are durable options when it comes to anchoring on pigmentation and toning. But these come with wide differences, which make it difficult to pick one for use.

If you’re confused about which printer to get, our survey on LED printer vs laser printer will help you out.

To make your selection among the two printers, it is important to rule out which differences would not be suitable for you.

Laser and LED printers have a similar mechanism of action, but the source of light is different.

When it comes to both printers, plastic toner powder is melted over the paper to bring the images out. A rotating drum located within the printer provides charges for static form of electricity. These charges are used as the template for printing images on paper.

The source of light is a laser in a laser printer, which is eventually used to melt the toner powder. And the same toner powder can be melted in an LED printer using an arrangement of light-emitting diodes.

The laser beam in laser printers is regulated by a mirror system that lights up one point at a time.

So, it is slower in action. On the other hand, LED printers get the job done by covering in lines, so they tend to go faster in speed.

An almost similar combination of drums, toners, and static electricity is used in the case of both printers, so their configuration is not so different. The basic difference lies in the type of source they use.

So, the speed is higher. Laser printer speed depends on conditions like the models and graphic intensity.

The faster laser models can print around 180-200 monochrome pages per minute, but these are quite expensive. The budget laser printers cannot reach this printing speed, so they are slower in action compared to LED ones.

Apart from working mode, durability is an important key difference in both printers. In this spectrum, laser printers have higher durability than LED ones. Laser beams, in combination with toners, provide enhanced printing quality.

Due to higher resilience, laser printing offers minimum smudging and maximum coverage. This feature is not present in LED printers due to poor longevity.

When it comes to portability, LED printers are very compact in appearance. They come with the least number of moving parts due to the absence of a mirror system. So, they have an easy build and can be easily portable.

But laser printers are built-in with lenses and mirrors, and it is a complicated structure. So, they are not portable, like the LED ones. This is a major difference between them to consider in the case of printing workshops.

Both printers also come with distinct output methods. The laser printer uses a laser light source to produce a static charge on a light-sensitive drum.

This static charge stimulates the toner over the page so that it is later printed on paper. So, mirrors and lenses are required for the output in such printers.

This can lead to a complex output in the end. Meanwhile, such mirrors and lenses are not required in LED printers, and the output is achieved by only a series of diodes. So, the LED output is simpler in comparison to laser outputs.

LED printers are cheaper in comparison to laser printers. Laser printers run on laser beams that are expensive and require a much-complicated mirror system. So, they are costly, difficult to construct, and use as well.

Meanwhile, the LED systems do not require any mirror systems, so they are easy to make. They are definitely on the more cost-effective side.

Which One Is Better – Laser or LED Printer?

Both printers have good working modes and will deliver any printing task perfectly. But if you’re going to choose one of them, the choice should depend on your budget and what performance you expect from the printer.

Laser printers are durable and last longer compared to LED printers, but they are very expensive.

So, if you think you can afford an expensive laser printer for longevity, you can go for it. But if you want to settle for something in the budget but less durable, LED printers should be your priority.

Your choice should also depend on what purpose you’re getting the printer for. If you want a faster speed for office or business purposes, LED printers are the best choice.

Bringing it to the end, it is evident that both laser printers and LED printers have characteristic differences. Obtaining proper information on both the printers can help make the ideal decision to purchase one.

So, with the help of our LED printer vs laser printer comparison, you can select your desired printer easily.