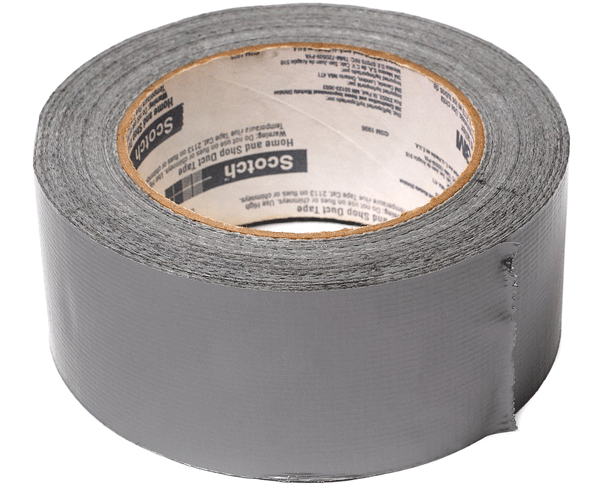 If you’re used to working with cameras and on sets and stages, you’re probably familiar with gaffer’s tape. And to know what duct tape is, you don’t really have to be a professional at anything.

Gaffer’s tape is made from heavy cotton cloth, and it contains very strong adhesive. It is normally used on stage or sets to hide equipment wires or to attach them to the floor so people don’t trip.

Duct tape, on the other hand, is very different, although many people consider gaffer’s tape to be a variation of duct tape. It is made from fine cloth or scrim and is normally quite elastic.

Facts to Choose One over the Other – Gaffer’s or Duct?

It all really comes down to what kind of work you want to do with the tape you are looking for. Making an informed decision is obviously important, so a good understanding of the different sorts of tape and your own work is necessary.

Say, if you are planning to work on theatre or set up a stage, obviously gaffer’s tape will be the way to go.

Duct tape will work too but you might face some trouble that could easily be avoided, using an alternative. It is used for many purposes, from patching up race cars, to literally sealing ducts at times.

This article will help you figure out which of these two super functional tapes will suit your purpose. So, let’s look at some basic differences and you can decide which to choose!

While duct tape can be used in various different fields of work, gaffer’s tape is more specified. You’ll hardly ever see duct tape being used on stage, or gaffer tape used to fix cars.

This is mainly why duct tape, or duck tape is very popular. Aside from its race car fixes, it has even been used on space crafts by NASA astronauts. It has literally played the role of “life-saver” on many occasions.

Other than that, even the military found uses for it when fixing their vehicles. A special sort of duct tape, which is heat-resistant is used on heating and cooling ducts. It’s safe, stops leakage, and is extremely useful. Duct tape even has uses in art or fixing phones. Let’s just say, it’s the perfect tool for any fix-it guy.

As for the latter, you will only see it adorning lengths of wire on stages, or theatre. Like I said before, gaffer tape is a go-to for visual artists, and only them. There are certain specific reasons for that.

Duct tape is normally very glossy. It reflects light greatly and is thus not suitable for cameras. With other jobs where duct tapes are used, there are hardly any uses of light and absolutely no use of cameras. So its shininess does not affect the field of work at all.

Gaffer tape always has a very matte finish. This is mainly because in theatre, studios, or on tape, there is abundant use of light. And you must remember, this tape is used to hide wires, so if the tape suddenly shows up on camera because of its glossy finish, it won’t really serve the purpose at all.

Thus, it is specially made to suit the users’ needs.

Now, this is a point you will definitely want to consider. You never want to use a tape and after taking it off, have a bunch of residual glue stuck to your wire or another object. It’s very tough to clean afterward, collects dirt, and eventually makes things look gross!

Duct tape is actually guilty of that. You take the duct tape off and it will leave a world of residual glue behind. Yes, this does prove how strong an adhesive it contains but it is just not good for the object it is used on.

Comparatively, gaffer tape is a winner here. It has an equally strong hold, yet, it does not leave any residual glue behind. Even if it does, it is so minimal that it’s hardly noticeable. Obviously, that is what you want, especially in the film industry.

The cameras and other equipment have to be moved around constantly or shifted from one place to another. So, gaffer tape is only ever used for a short period of time. Imagine the hassle if the crew had to spend extra time cleaning the glue off huge lengths of wire.

Normal duct tapes are not heat resistant at all. Pressure and heat will make the glue softer, causing the tape to eventually lose most of its stickiness.

Thus, only a special sort of duct tape is used for sealing heating ducts. The use of duct tapes, on that way, is more specified.

Gaffer tape does have more resistance to temperature though. It is used to cover a large amount of active wire that is constantly stepped on.

In order to tolerate that sort of heat and pressure, the tape must have some resistance. And it does, making it perfect for the use of gaffers on stage.

To summarize, let’s wrap up the good and bad about duct tape.

One thing worth mentioning is that duct tape is much cheaper than gaffer’s tape. Plus, it has varying functions in many different fields of work.

The versatility is definitely a good thing since one roll of duct tape can help in many situations. Also, the stretchiness of the material makes it easier to use for many different purposes.

Let’s consider how duct tape may not be the right way to go. Well, the first thing that comes to mind is heat resistance. If you have to choose a different type of duct tape to ensure insulation, is the tape really versatile?

Plus, the fact that it leaves quite a bit of residue behind is a big issue if you mean to use the tape for a short period of time. The gloss is fine in most cases but for theatre work, it is not recommended at all!

Below, take a further look at the pros and cons of gaffer’s tape before you make a final decision.

However, gaffer’s tape does have that matte finish that can be a great help on camera. It may not be relevant for most jobs but it’s not really made to solve every problem.

The lack of residue is another good thing about gaffer tape, which probably should be a trait of every type of tape. At the end of the day, no user wants to be left with sticky, gross equipment.

The resistance to heat is also an important aspect of tape that is used on appliances. This is something useful enough that it increases the functionality of tapes drastically.

Gaffer tape is quite expensive compared to duct tape. Why would someone spend so much on a slightly better version of the same tape?

Well, that is a legitimate concern, which is why we are analyzing these two tapes so much. Gaffer tape also lacks elasticity, which is kind of disadvantageous but something that can be tolerated.

Now that you have all the good and the bad about the tapes in one place, you can make an informed decision! If necessary, look around and see which tape you prefer the most. But as for the use and quality, you can find it all right here.